A Brief Introduction of Mandala art in Spirituality If you have an interest in spiritual Asian Art, then you might have encountered a mandala. In Sanskrit, its meaning is ‘circle’ or ‘discoid object.’This geometrical design holds great value in Buddhist and Hindu cultures. Mandalas reveal various aspects of the universe and are used for meditation and symbols of prayers in countries like Tibet, China, and Japan.

In the most basic format, Mandalas are circles inside a square and in sections that are all arranged around a single central point. Usually, mandalas can be drawn on paper, cloth, or a surface with threads, stone, or bronze material. Apart from their vibrant appearance, Mandala holds special value for meditation.

Different cultures have different Mandalas, which are used for a multitude of purposes, both spiritually and artistically. So have you ever wondered how many types of mandala art there are? Let’s look at main types of Mandalas and their usage.

These are symbolic, and each color, shape, and line represents the different religious and philosophical systems. Students come up with their intuitive writing as per the construction and design principles, revealing the visual symbolization of whatever they have learned. It works as colorful mental maps for their creators.

The main purpose of healing the Mandala is meditation, which is more intuitive than teaching Mandala. It delivers wisdom, generates peace and calm, and enhances focus and concentration.

Earlier, Buddhist monks used sand mandalas as a tradition. Such designs represent various symbols made from colored sand and show the impermanence of human life. 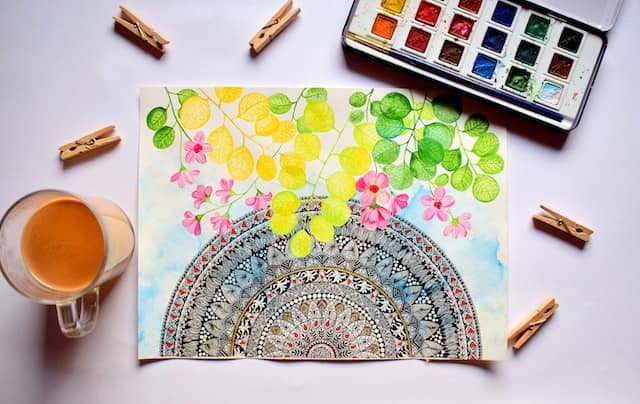 Within the circular pattern of the Mandala, you can notice some common symbols. Traditionally they abstractly represent Buddha’s mind, usually depicted as a tree, wheel, flower, or jewel. The center is a dot that showcases free of dimensions; it is the starting point. Then you can see lines and geometric patterns surrounding the dots, which symbolize the universe, followed by the outer circle, which depicts the cyclical nature of life.

How Mandalas are used

Mandalas are used for meditation, religious traditions, and modern contexts. There are good and positive Meditative effect of Mandala Painting on human body that helps to calm & relax the mind. Buddhism’s old traditional Mandala reflects the state of enlightenment of Buddha through sand art.

The mandala pattern contains metal and small tubes to create the same texture and grains. It takes weeks to create such patterns, and soon after completion, they are destroyed to follow the Buddhist belief that nothing is permanent.

As Mandala has found its relevance in a modern context, it is used in various ways. It has also found its significance in yoga, a sacred space to reduce the external influence. Mandalas are often positioned in a studio or drawn during meditation. These patterns are also used in healing circles, a practice that has roots in Native Americans. Circles often find their relevance in healing the heart, body, and mind.

Mandalas also contain gong instruments to generate unique sounds. These gongs are handmade and can generate a wide variety of sounds, from deep and mysterious to high and adventurous. These gongs penetrate the entire body to produce vibrations to awaken us to life.

The human body is a composite of frequencies, and the tones produced through gongs balance the person who lies down and allows the gong tones to spread over him. Such spiritual sound healing can treat the inner soul of the body and can give you mental peace.

Mandalas, a spiritual symbol of Asian Art, have become the most popular meditative element in various cultures. In both Hindu and Buddhist cultures, mandalas depict the universe and guide the enlightenment path.

Mandalas are widely used in yoga studios, work as healing circles, and are significant in many meditation practices. Creating Mandalas is a transformative practice that restores wisdom and inner peace in our bodies.